Thank you to everyone who sent WDHT Love to Canada’s Parliament. Together we helped changed history.

On June 17 Canada declared a national climate emergency. We are not done yet. We are updating our campaign. Found out why and what comes next. Note that we are not adding anything new. We had previously also asked for help to enshrine climate targets under national law. We are just contextualizing it.

Background:
On Thursday, May 17, a motion was introduced in the House of Commons for Canada to declare a climate emergency. If passed, it would have the House formally declare that Canada “is in a national climate emergency which requires, as a response, that Canada commit to meeting its national emissions target under the Paris Agreement and to making deeper reductions in line with … objective of holding global warming below two degrees Celsius and pursuing efforts to keep global warming below 1.5 degrees Celsius.”

The last week of the 42nd Parliament:
It was like something out of Alice in Wonderland.
• On June 17 Canada declared a national climate emergency. Of note, the Scheer Conservatives opposed the motion.
• On June 18, for the second time, the Trudeau Liberals approved the Trans Mountain pipeline.
• On June 20, the Scheer Conservatives revealed their woefully inadequate and widely criticized plans for the climate crisis. Former PC PM Kim Campbell called the plans “a sop.”
• After much wrangling by Conservative Senators and massive lobbying by oil companies, important bills to protect the water, air, climate and soil became the law of the land. These bills replaced the environmental laws shredded by the Harper Conservatives in 2012 in Bill C38.
• The next day, Premier Jason Kenney, United Conservative Party of Alberta leader and former Harper Cabinet Minister, filed a challenge to Bills 69 and 48.
• On the last day of the 42nd Parliament of Canada, June 21, which is also Canada’s National Indigenous People’s Day, a sad for democracy and reconciliation happened. Conservative Senators filibustered and killed NDP MP Romeo Saganash’s private member’s Bill 262 to enshrine U.N.D.R.I.P. under national law. This also would have helped protect the land, air, water and climate because the Indigenous People of our country would have a lot more say on natural resource projects on their land – as they should.

We don't have time for these partisan games anymore.

Help enshrine Canada’s GHG targets under national law:
Because we have a declared a climate emergency, we are closer to having science-based, and legally binding greenhouse-gas targets enshrined under national law.

Going forward, Canada, and all countries should have a transparent process for reporting GHG emissions and cross-party cooperation. Specifically, Canada should use the United Kingdom’s Climate Change Act (2008) as a model, which was the recommendation of the Environmental Commissioner of Ontario in: Climate Action in Ontario: What’s Next?. In March 2019, the UK's greenhouse gas emissions hit their lowest levels in almost a century.

About Citizens’ Climate Lobby (CCL) Canada:
CCL Canada is grassroots, nonpartisan and volunteer-run. We want everyone to treat the climate crisis as a non-partisan issue.

History Note:
In May 2010, the NDP Bill C311, democratically passed in the House of Commons. In November 2010, Bill C311 was killed in the senate by Conservative Senators. It would have enshrined Canada’s international climate targets under the national law. This allowed for the Harper Conservative to pull Canada out of the Kyoto Protocol. Canada was the only signatory to the Kyoto Protocol to do so. Our first campaign in 2010 at CCL Canada was to support this bill. Never did we imagine a bill passed in the House of Commons would be killed in the Senate.

Democracy is the solution to the climate crisis.

Please agree to our campaign.

By agreeing with our campaign, as we gain support for it at We Don’t Have Time, they will share our progress with Minister McKenna, and the environment critics for the opposition members in the House of Commons via Twitter.
twitter.com/cathmckenna
twitter.com/honedfast
twitter.com/alexboulerice
twitter.com/ElizabethMay

Together we are the solution to the climate crisis

We Don’t Have Time is a social network for everyone who wants to be part of the solution to the climate crisis. Send climate love, ideas and warnings to the people in power.

Brilliant initiative! Let’s hope the rest of the world follows in their footsteps.

Hopefully they mean what they say, and will actually do something.

This sounds good, May we know exactly what the Canadian government and citizens will be doing at the period of climate emergency and how long it will be sustained?

Canada has now declared a climate emergency 💚. Thanks for all agrees. Please continue to support this campaign to keep reminding all parliamentarians that we are in an emergency and switch focus to asking Parliament to take the climate crisis out of partisan hands.

Dear Everyone, We have sent this campaign to a number of parlamentarians in order to build support for the issue. Keep sharing this!

The time has come to actively find solutions and fast! It may already be too late so sooner the better. Glad to see initiatives like this to push things forward !

250 agrees. We are going for 1000+ Please share this campaign in your network on all social media

Excellent work! Let's keep pulling together and we can do this. nobody said change is easy.

Great initiative! Hope this will be followed by concrete action 👍

Citizens’ Climate Lobby Canada
May 31, 2019
Embed this campaign on any site or blog with Embed.ly

You may also agree with

Give climate love to © 2020 We Don't Have Time – All rights reserved.
‍
We Don’t Have Time is a social media network for everyone who wants to be a part of the solution to the climate crisis. If a large enough number of people want change, and if that energy is directed towards those in charge – change comes. But we don’t have time to wait. The social network is operated by the company WeDontHaveTime AB (publ), whose majority shareholder is the WeDontHaveTime Foundation. The Foundation’s principal purpose is to contribute to a reduced climate impact and an ecologically sustainable environment. Our headquarters is located in Stockholm, Sweden.

The content of the We Don't Have Time social network is user-generated. The We Don’t Have Time organization does not automatically endorse users’ opinions and claims on the social network. All users of We Don’t Have Time have subscribed to We Don’t Have Time’s Terms of Use, which, among other things, prohibits hateful, abusive, and violent content. All users must also ensure that their content is true and based upon, or originates from, reliable sources. If you discover content that violates our Terms of Use, please notify us immediately. A campaign agree is a way of showing that you approve of the campaign’s main message. In order to agree to a campaign, you need to use a unique email address or a unique social media account. It is not possible for a registered, unique user to agree several times to the same campaign. We Don’t Have Time guarantees that all agrees on the social network emanate from actual user activity. We Don’t Have Time closely monitors the social network in order to minimize spamming, manipulation, or any other forms of illicit behaviour. The agrees are anonymized. In the future, we might implement a function that allows users to be identified when agreeing to a campaign.

Be part of our network 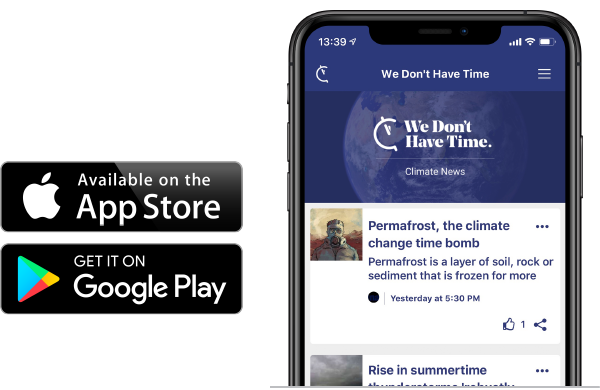 “I Just found out my house is considered destroyed “

Thank you! Your submission has been received!
Oops! Something went wrong while submitting the form.



Check your inbox and click on the link to verify your e‑mail. If you can't find the mail, check your spam folder.

I have verified my email


Subscribe to our newsletter to get the latest climate news and inspiring updates.
We will not spam you, we promise!

Please sign me up

No thanks



The more people who agrees with your campaign, the greater the impact you will do.

Thank you! Your submission has been received!
Oops! Something went wrong while submitting the form.
You can copy the url to share in social media and mail. Paste the url at Medium and the campaign will automatically embed.
Continue



The levels put pressure on recipients in order to trigger a response or to resolve the campaign.

Do you want to share this campaign on your blog or web page? Just copy the embedded link below and paste it in your page.
Close

